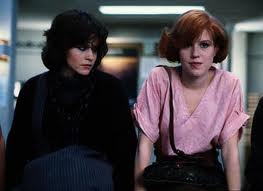 If you don’t count Brian the Brain’s pushy mom, there are two women in The Breakfast Club: Claire the Princess and Allison the Kook. The three main male characters all land in detention for doing Very Bad (and therefore Interesting) Things – taping someone’s arse cheeks together, bringing a gun to school, generally being a criminal. Claire, meanwhile, is being punished for the princessly transgression of cutting class to go shopping. And Allison? Allison didn’t do anything at all. She turned up for the detention because she had nothing better to do on a Saturday. That’s how little effort the writers put into her back-story.

Still, at least both girls get a happy ending – right? Er…sort of. Allison gets a make-over, and then she gets the wrestler guy. That’s it. That’s pretty much the culmination of her narrative arc. Mascara and a nice blouse, and a bloke who wouldn’t look at her – literally – until she put on mascara and a nice blouse.

Cracked have pointed out that this is just one example of the Grease/She’s All That phenomenon, whereby young viewers are encouraged to believe that changing their entire demeanour and personality is both a) as easy as getting a new hairdo and b) essential if you want success, happiness and That Guy/Girl.

Claire, of course, has never had any trouble Getting The Guy, so at the end of this film naturally she gets The Bad Guy. (Not the guy from Die Hard. The other bad guy.) Not only is the happiness to be found with a character who has sustained a constant stream of nasty, misogynist abuse towards Claire throughout the film somewhat suspect, but according to, once again, those folks at Cracked (they’re always right), it won’t even last.

Poor Claire. Still, at least she can dance.